Ammonium cations are positively charged polyatomic ions with the formula NH4+. It is formed by the protonation of ammonia (NH3). Ammonium is also the generic name for positively charged or protonated substituted amines and quaternary ammonium cations (NR4+) in which one or more hydrogen atoms are replaced by an organic group. A sulfide is an inorganic sulfur anion with the formula S2-, or a compound containing one or more S2- ions. Do not impart color to sulfide salts. Because it is classified as a strong base, even dilute salt solutions such as sodium sulfide (Na2S) are corrosive and can attack the skin.

Ammonium sulfide is an inorganic compound found in nature. We distinguish them as ionic compounds. It may also be called azaniumyl sulfasalazine or diammonium sulfide. This connection is very important for the photography and textile industry. This is because it is widely used as a solution for photo processing and textile production.

Molar mass is 66.122 g mol-1. The molecule is formed by a monocentric sulfur atom to which two ammonium cations NH4+ are attached. Its chemical structure is the conventional notation used for organic molecules and can be written as : 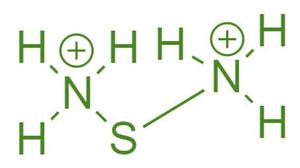 It has been established that ammonium sulfide does not occur as a free compound in nature. On the other hand, it must be prepared, and the method of obtaining this compound is as follows. To obtain ammonium sulfide, ammonia and hydrogen sulfide must be reacted.

Question 1: Is the Ammonium Sulfide Insoluble?

Ammonium sulfide is a yellowish solid at low temperatures, but unstable above 18°C ​​and has a very strong and extremely unpleasant odor of rotten eggs. It is well soluble in water and ammonia, as well as alcohol.

In ammonium sulfide, the ammonium cation and the sulfide anion are ionically bonded to each other, although all atoms are non-metallic. The difference in electronegativity between ammonium and sulfur ions allows for ionic bonding. At the same time, the hydrogen atom is covalently bonded to the nitrogen atom.

It can be used as a selective reducing agent (see 2,4-dinitrochlorobenzene); If there are two nitro groups, only one of them is selectively reduced.

In ammonium sulfide, the ammonium cation and the sulfide anion are ionically bonded to each other, although all atoms are non-metallic. The difference in electronegativity between ammonium and sulfur ions allows for ionic bonding. At the same time, the hydrogen atom is covalently bonded to the nitrogen atom.

Question 5: Is it legal to detonate stink bombs?

This issue may be considered at Monday’s board meeting. A stink bomb is a glass bottle about an inch long that contains a chemical that produces an unpleasant odor that can make people sick or harm asthmatics. State law permits to purchase or possession, but use is illegal.

Question 6: Why Use Ammonium Sulfate in Bread?