Based upon the current periodic table below are some comparisons between Nitrogen, Oxygen and Hydrogen:

Ammonium nitrate is a colourless crystalline salt, which consists of two ions; a cation, the ammonium ion (NH4+) and anion the Nitrate ion (NO3–). The cation and anion are held together by a robust electrovalent bond. It is highly soluble in water.

Structure of ammonium nitrate is composed of two ions (Ammonium and nitrate), which can be shown as below: 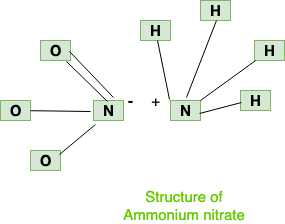 Laboratory formation: NH4NO3 can be prepared in laboratory from the acid base reaction between nitric acid and ammonia.

Natural formation: Ammonium nitrate is found as the natural mineral gwihabaite in the driest regions of the Atacama Desert in Chile. It was mined there until the Haber–Bosch process made it possible to synthesise nitrates from atmospheric nitrogen, thus rendering nitrate mining obsolete.

The Haber–Bosch process, is a man-made organic process and is that the main industrial procedure for the manufacturing of ammonia today. It is named after its inventors, the German chemists Haber and Carl Bosch, who developed it within the first decade of the 20th century. The process converts atmospheric nitrogen (N2) to ammonia (NH3) by a reaction with hydrogen (H2) employing a metal catalyst under high temperatures and pressures:

Ammonium nitrate is one of the popular chemicals which is being used in different sectors like agriculture, nutrients, mining etc. Below are more detailed points for the use of ammonium nitrate.

Recent Trivia: On 4th august 2020 the lebanese capital Beirut experienced a massive explosion which was caused by more than 2,700 tonnes of ammonium nitrate stored improperly.

The government has amended the rules for ammonium nitrate to curb its pilferage, introduce fire fighting provisions as well as improve ways to handle and store the chemical in the light of lessons learnt from the deadly explosion that killed about 140 people.

Ammonium nitrate fertiliser is the compound’s most common application but it also has a very volatile quality, making it useful in some industries. the use of NH4NO3 (nitrate) in gardens and large-scale growing fields stimulates plant growth and provides a ready source of nitrogen that plants can draw from.

Question 2: What happens when one mix water and ammonium nitrate?

Ammonium Nitrate is used as an ingredient for the manufacture of explosives, anesthetic gases, fertilizers, cold packs, etc.

Question 4: State the reason behind the explosive nature of ammonium nitrate?

Question 5: What are the products formed when we heat Ammonium Nitrate?

On heating Ammonium Nitrate, Nitrous Oxide and water vapour are formed. The chemical reaction for same is given below: