Ammonium Bromide is the ammonium salt of hydrobromic acid. It is an odorless white crystal. It is soluble in water. On exposure to air, it becomes to yellow color because of the oxidation of traces of bromide to bromine. To write the formula of ammonium bromide. Ammonium is not an element it is the group of elements bonded together to form an atomic ion it has a 1+ charge NH4+. Bromine is a chemical element with the symbol Br. It has a negative charge then both are attracted to form the ionic compound NH4Br.

It can be prepared by the reaction of Hydrogen Bromide on ammonia, 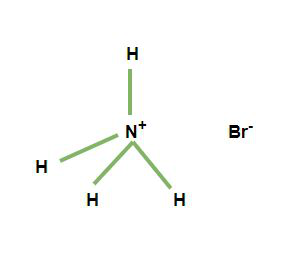 Ammonium Bromide is the ammonium salt of hydrobromic acid. It is composed of ammonium and bromide ions in a 1:1 ratio. The chemical crystallizes in colorless prisms, processing a saline taste.

Question 3: What type of intermolecular forces is Ammonium Bromide?

Ammonium Bromide is the ammonium salt of hydrobromic acid. It is a strong electrolyte when it is present in the water. It’s decomposed to the ammonia and hydrogen bromide when it gets heated at raised temperature levels.

Question 4: What are the uses of ammonia?

Ammonia is used as a fertilizer in agriculture. It is also used in wastewater treatment, rubber, paper, leather industries and also used in the production of printing as well as cosmetic industries.

Question 6: Is ammonia acidic or base?

Ammonia is a weak base because its nitrogen atom has an electron pair that easily accepts a proton but it reacts with water to produce ammonium ions and hydroxide ions.

Question 7: What are the uses of bromine?

Bromine has a large variety of uses such as agricultural chemicals, dyestuffs, insecticides, pharmaceuticals, and chemical intermediates. Its compounds are effective pesticides used both as soil fumigants in agriculture, particularly fruit growing, and as a fumigant to prevent pets from attacking stored grain and other produce.