As we all have a decent understanding of baker’s ammonia in day to day life which is employed within the kitchen for creating tasty crispy baked cookies or crackers biscuit, it’s also employed in fast cooking. In modern chemistry, we call it chemically “ammonium bicarbonate”. The term Ammonium bicarbonate is really an old term that’s now commonly referred to and replaced with other substances like Baking powder (leavening) or baking soda (saleratus). It’s a very important point to know that baker’s ammonia is completely different from household ammonia which could be a toxic substance.

What is Ammonium Bicarbonate?

Ammonium Bicarbonate is an inorganic chemical compound that’s mildly basic. It consists of the ammonium cation and therefore the bicarbonate anion. Chemically it is the bicarbonate salt (HCO-3) of ammonia (NH+4). It’s a solid that has no colour and it degrades readily to ammonia, carbon dioxide, and water.

Carbon dioxide: One in all the heavy colourless gas which is created by the burning of plant or animal matter. Its statement is CO2 and also acidic in nature with soluble in water. CO2 occurs naturally in the earth’s atmosphere as joined by the trace gas.

Ammonia: Ammonia may be a colourless, highly irritating gas with a pungent smell and suffocating odour. Its formula is NH3. About 80% of the ammonia produced by industry is employed in agriculture as fertilizers. Ammonia is also used for the manufacturing of plastics, explosives, textiles, pesticides, dyes and other chemicals. It’s also used as a refrigerant gas, for the purification of water supplies.

Water: Water is formed from hydrogen and oxygen, and it exists in gaseous, liquid, and solid states. Water is one of the foremost plentiful and essential compounds, occurring as a liquid on the planet’s surface under normal conditions. Its chemical formula is H2O with the molecular mass of eighteen.

This compound has multiple names which reflect its long history, such as:

Appearance and Melting Point: White crystalline solid with a melting point of 41.9°C.

Ammonium bicarbonate chemical structure is made up of the ammonium cation NH4+ and the bicarbonate anion HCO3–. 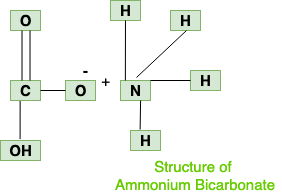 Ammonium bicarbonate is present during a small quantity in nitrogenous organic matter, together with multiple other ammonium salts. It also occurs naturally as a really rare mineral referred to as “Teschemacherite”.

The Ammonium bicarbonate is formed by combining two things that are greenhouse gas which is carbon dioxide and ammonia:

As ammonium bicarbonate is unstable thermally, the reaction solution is always kept under the cold temperature. Thus, this ends up allowing the precipitation of the merchandise as the white solid. About 100,000 tons were produced in a similar way within the year 1997.

Ammonia gas sent to a solution (aqueous) of sesquicarbonate that’s a 2:1:1 mixture of, (NH4)HCO3, (NH4)2CO3 and H2O transforms it into a traditional ammonium carbonate ((NH4)2CO3), which may be obtained within the crystalline condition from a solution or preparation created at about 30 °C of temperature. On exposure to this compound to air provides off ammonia and reverts it to the ammonium bicarbonate.

Salt of Hartshorn: Compositions containing carbonate of ammonium have long been known. They were once produced commercially, formerly referred to as a spirit of ammonia or salt of hartshorn. It absolutely was obtained by the dry distillation of nitrogenous organic matter like hair, horn, leather. Additionally to ammonium bicarbonate, this material contains ammonium carbamate (NH4CO2NH2), and ammonium carbonate ((NH4)2CO3). It’s sometimes called ammonium sesquicarbonate. It gives out a really strong ammoniacal smell, and on digestion with alcohol, the carbamate is completely dissolved leaving a by-product of ammonium bicarbonate. The same decomposition takes place when the sesquicarbonate is exposed to air.

Physical properties of ABC(Ammonium Bicarbonate) can be stated as following;

Chemical properties of ABC (Ammonium Bicarbonate) will be stated as follow;

Following are the key commercial and general uses of ammonium bicarbonate:

Question 1. What is the way to measure the concentration of the bicarbonate, after we are purging the solvent (water) with the conventional air or CO2 gas?

We’ve several options betting on how accurate your result should be. If you recognize the initial pH and you’re using pure water you will be able to obtain a decent estimate by measuring the pH change combined with modelling of your system, for instance with phreeqc. Alternatively, you will sample your solution, add a base to the sample and so titrate between both pK values of H2CO3. Other options are to feature Ba and also make your salt alkaline. Then you will be able to weigh the BaCO3 after drying.

Ammonium Carbonate is maybe a crystalline, non-toxic, white-coloured salt with the formula (NH4)2CO3. It’s also referred to as baker’s ammonia and also as hartshorn. Ammonium carbonate or carbonate is water-soluble, and also the compound decomposes in the plight or hot water.

Question 3. What are the key points of ammonium bicarbonate?

Ammonium Bicarbonate is a chemically inorganic compound that is the bicarbonate salt of the ammonium ion in chemical terms. This substance is used as a leavening and stabilising agent, also as an acidity regulator, due to its physicochemical qualities.

Question 4. In the pH scale where does ammonium bicarbonate lie?

Ammonium bicarbonate lies on the basic side of the pH scale that is 9.0, which is in the approx pH range of many hydrolases. That’s why ammonium bicarbonate is a pH regulator for proton-forming biotransformation reactions catalyzed by immobilized enzymes.