The chemical formula for ammonia is NH3. It is a chemical compound that is a poisonous gas with a pungent odor. Ammonia consists of 1 Nitrogen and 3 Hydrogen atoms. 3 Hydrogens are directly linked to Nitrogen. Ammonia undergoes some reactions on its own. They are molecular autoionization, combustion, etc. Ammonia is used as a fertilizer, used as a fuel for standard engines, and used as a building block material for the synthesis of pharmaceutical products. Another name for ammonia is Azane.

Ammonia is a chemical compound consisting of 1 nitrogen and 3 hydrogen atoms. The chemical formula of ammonia is NH3. The hydrogen atom is directly bonded to nitrogen. 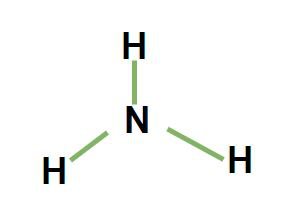 Question 1: How do we get Ammonia?

The production of ammonia is a very simple and easy process. It is produced from air and water. Ammonia is a part of the nitrogen cycle, produced naturally from the decomposition of plants, and animals’ organic matter. A typical modern method of ammonia production is the conversion of natural gas or liquid petroleum or liquid naphtha into gaseous hydrogen. From this separate the hydrogen by steam forms from hydrocarbons. Then combine this hydrogen with nitrogen. This process is called the Haber Bosch process.

Question 2: Is ammonia acidic or basic?

Question 3: How do you test ammonia in the mixture?

Question 4: What happens when ammonia bubbles in water?

Question 5: How is ammonia collected?

The ammonia is collected by the downward displacement of air. The ammonia gas is lighter than natural gas. Ammonia contains Nitrogen and Hydrogen atoms. The chemical formula of ammonia is NH3.

Question 6: What is liquor ammonia?