It is an organic compound that contains the elements carbon, hydrogen, nitrogen, and oxygen. Some of the other elements can also be found in the side chains of certain amino acids. The amine and carboxylic acid groups are both bonded to the first (alpha-) carbon atom in amino acids.

“Amino acids are organic compounds that combine to produce proteins; hence, they are referred to as protein components”

These biomolecules are involved in various biological and chemical functions in the human body and are necessary ingredients for human growth and development. There are around 300 amino acids that occurred in nature.”

R-CH(NH2)-COOH is the chemical formula of amino acids. 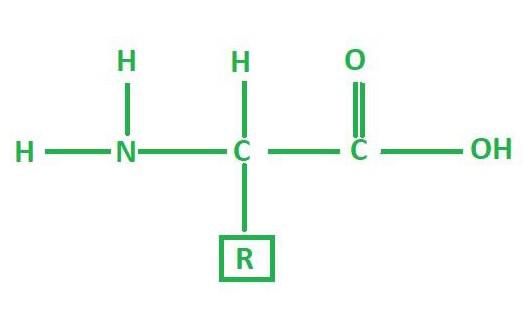 Each amino acid molecule has a central carbon (C) atom (α-carbon) that is near to both an amino and a carboxyl group. In general, a hydrogen atom and the R group satisfy the remaining two-carbon bonds. Furthermore, amino acids differ from one another due to the specific chemical structure of the R group.

Amino acids are essential for a variety of biological and chemical functions in our bodies, including tissue building and repair, enzyme synthesis and activity, food digestion, molecule transportation, and so on. Only a few amino acids can be synthesised by our bodies, and the remainder, known as essential amino acids, must be obtained from protein-rich meals in our daily diet.

Our bodies can easily synthesise a few of the 20 amino acids on their own, which are known as non-essential amino acids. Alanine, asparagine, arginine, aspartic acid, glutamic acid, cysteine, glutamine, proline, glycine, serine, and tyrosine are one of them.

Question 1: Why are amino acids referred to as amphoteric?

Amino acids are both acidic and basic in nature. Because of this, they are amphoteric. The pH of the solution determines the predominant form of the amino acid.

Question 2: What are the health hazards of amino acids?

It is very corrosive to the respiratory system and the skin. It is also harmful if swallowed. In addition, it may cause burns in the mouth, throat, and stomach.

Valine is an essential amino acid that is required for protein synthesis. Valine is an alpha-amino acid, which means it has an alpha-amino group (which is protonated -NH3+ under biological conditions), an alpha-carboxylic acid group (which is deprotonated -COO- under biological conditions), and an isopropyl group on the side chain. As a result, it is classified as a non-polar aliphatic amino acid.

Question 4: When were amino acids have been discovered?

In 1806 the amino acid was discovered. Two French chemists called Pierre Jean Robiquet and Louis-Nicolas Vauquelin identified the first amino acid, asparagine, in asparagus. Glycine was later discovered in gelatin, cysteine in urinary stones, and leucine in muscle and wool.

Question 5: What is the name of the amino acid bond?