Before reading this article, we recommend you to first read about Pushdown Automata and Context Free Languages.

Derivation Tree : It tells how a string is derived using production rules from S and has been shown in Figure 1. 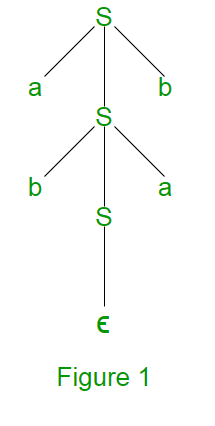 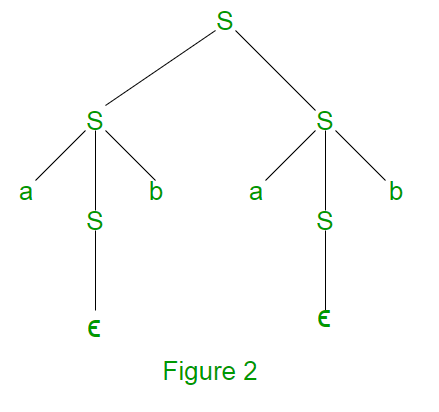 Question : Consider the following statements about the context free grammar
G = {S -> SS, S -> ab, S -> ba, S -> ?}
I. G is ambiguous
II. G produces all strings with equal number of a’s and b’s
III. G can be accepted by a deterministic PDA

Statement II states that the grammar G produces all strings with equal number of a’s and b’s but it can’t generate aabb string. So statement II is incorrect.
Statement III is also correct as it can be accepted by deterministic PDA. So correct option is (B).

Question : Which one of the following statements is FALSE?
A. There exist context-free languages such that all the context-free grammars generating them are ambiguous.
B. An unambiguous context free grammar always has a unique parse tree for each string of the language generated by it.
C. Both deterministic and non-deterministic pushdown automata always accept the same set of languages.
D. A finite set of string from one alphabet is always a regular language.

Solution : (A) is correct because for ambiguous CFL’s, all CFG corresponding to it are ambiguous.
(B) is also correct as unambiguous CFG has a unique parse tree for each string of the language generated by it.
(C) is false as some languages are accepted by Non – deterministic PDA but not by deterministic PDA.
(D) is also true as finite set of string is always regular.
So option (C) is correct option.

Ambiguity is a common feature of natural languages, where it is tolerated and dealt with in a variety of ways. In programming languages, where there should be only one interpretation of each statement, ambiguity must be removed when possible. Often we can achieve this by rewriting the grammar in an equivalent, unambiguous form.

This article has been contributed by Sonal Tuteja.

Complete Interview Preparation
View Details
System Design-Live Classes for Working Professionals
View Details
Data Structures & Algorithms- Self Paced Course
View Details
Most popular in Theory of Computation & Automata
More related articles in Theory of Computation & Automata
We use cookies to ensure you have the best browsing experience on our website. By using our site, you acknowledge that you have read and understood our Cookie Policy & Privacy Policy