Suppose we have a context free grammar G with production rules: S->aSb|bSa|SS|ℇ

Derivation tree: It tells how string is derived using production rules from S and has been shown in Figure 1.

The symbols underlined are replaced using production rules. The derivation tree for abab using rightmost derivation has been shown in Figure 2. 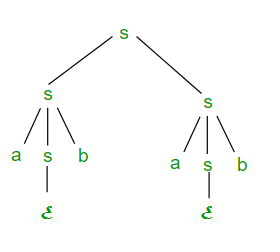 A derivation can be either LMD or RMD or both or none. For Example:

Question: Consider the following statements about the context free grammar

Which combination below expresses all the true statements about G?

Solution: There are different LMD’s for string abab which can be

So the grammar is ambiguous. So statement I is true.

Statement II states that the grammar G produces all strings with equal number of a’s and b’s but it can’t generate aabb string. So statement II is incorrect.

Statement III is also correct as it can be accepted by deterministic PDA. So correct option is (B).

Question: Which one of the following statements is FALSE?

Solution: (A) is correct because for ambiguous CFL’s, all CFG corresponding to it are ambiguous.

(B) is also correct as unambiguous CFG has a unique parse tree for each string of the language generated by it.

(D) is also true as finite set of string is always regular.

So option (C) is correct option.

This article is contributed by Sonal Tuteja.Please write comments if you find anything incorrect, or you want to share more information about the topic discussed above