The AWS Elastic Beanstalk is a service provided by AWS that is used to deploy and scale web applications built on Java, Python, Go, Ruby, Node.js and Docker, etc.

In this article, we will look into how users can add their own security group to their AWS Elastic Beanstalk environment.

Step 1: Login to the AWS management console and then navigate to the Amazon Elastic Compute Cloud console.

Step 2:  From the navigation pane on the left choose security groups. 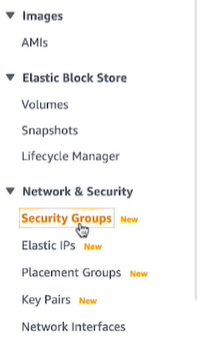 Step 3: Now note the pre-existing security group that you want to add to your Elastic Beanstalk environment.

Note: If your instances are launched within a virtual private cloud make sure you specify security group ids instead of security group names. Your custom security group should belong to the same VPC where your EBS environment resides.

Step 6:  Now compress the code and then deploy it using EBS console or the elastic beanstalk command line: