This article aims to enlighten you about “Starting a Previously Stopped Amazon RDS DB Instance”. AWS provides us the facility to start, stop or delete any DB Instance at any time. All this is entirely dependent on the user, i.e. he or she is the only person who can perform these operations on the running DB Instance. Let us understand the difference between, stopping & deleting database instances.

Step 1: Login into your AWS account, once you are directed ahead. From the left, click on “services” present on the leftmost part of the AWS management console. And from the drop-down menu tap on the option “RDS” under the database section. Refer to the image attached ahead.

Step 2: In a while, RDS management console will load on your screen. From the navigation pane, choose “Databases”. Here is the image to refer to.

Step 3: Now, from the list of existing database instances, select the instance, you want to start. Here is the image attached ahead for reference.

Step 4: Now, click on the tab “Actions”. Further from the listed options, choose “Start”. Here is the image attached for better understanding.

We have officially completed the process of starting a previously stopped DB Instance. To confirm that the DB instance is started or not. Check the status of the instance. It should display a message saying, “Available”. Refer to the image attached. 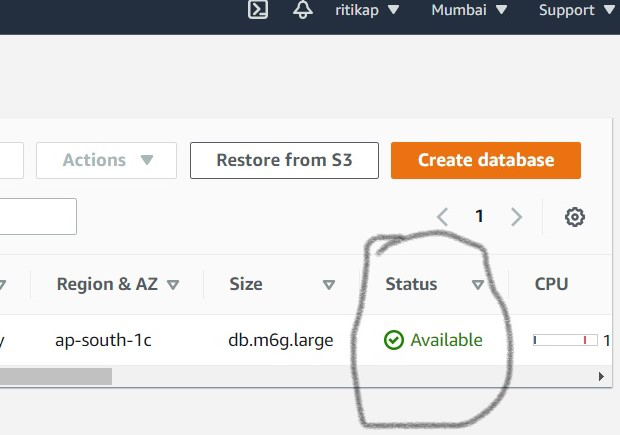 In this way, we can simply start a previously stopped Amazon RDS DB instance using the console medium. To avoid bills on your free tier accounts make sure you delete all the services and terminate all the machines before signing out of our account.