Aluminum, one of the components of aluminium bromide, accounts for over 8.1 percent of the Earth’s crust, making it one of the most prevalent minerals on the planet. Despite the fact that it is present in a wide range of compounds on Earth, aluminium is rarely discovered in its free metal state. Instead, it is frequently found in minerals such as bauxite and cryolite. Bromine, the other component of aluminium bromide, is a poisonous, oily, crimson liquid. Bromine, in addition to being employed in the manufacture of dyes, pesticides, and fertilizers, is occasionally detected in trace amounts in living species, although having no known biological purpose in humans.

What is Aluminium Bromide?

Aluminum bromide is a pale yellow chemical solution, also known as tribromoalumane or aluminium tribromide (the most common form). It is a colorless, hygroscopic solid that may be sublimated. Its molecular or chemical formula is AlBr3.

It appears in its anhydrous state as a white to yellowish-red compound with a lumpy solid and a strong odour. It appears as a liquid in its watery form. It is extremely damaging to the eyes, mucous membranes, and skin. It is frequently utilized in the production of many compounds. It is a solution in a wide range of organic solvents, including benzene, toluene, simple hydrocarbons, nitrobenzene, and xylene.

The formula of Aluminium Bromide is made up of one aluminium cation (Al3+) and one bromide anion (Br–). Therefore, the molecular or chemical formula of Barium sulfate is AlBr3. Its chemical formula reveals that it is composed of one aluminium atom and three bromine atoms. It has a molecular mass of 266.694 g/mol as an anhydrous chemical and 374.785 g/mol as a hexahydrate. It has a monoclinic crystalline structure with a positive dipole moment. 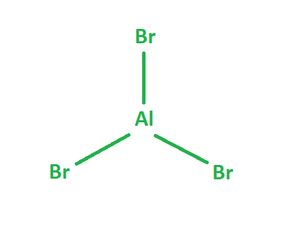 Question 1: What is the process for the preparation of Aluminium Bromide?

Aluminium bromide is prepared by the reaction of Hydrogen bromide (HBr) with aluminium metal (Al).

The second method to obtain Aluminium Bromide is through bromination.

Question 2: How does aluminium bromide exist in nature?

In the solid state, solutions in noncoordinating solvents (e.g., CS2), the melt, and the gas phase, the dimeric form of aluminium tribromide (Al2Br6) predominates. These dimers only break down into monomers at high temperatures.

Question 3: What are the side effects of aluminium bromide?

Aluminum Bromide can harm you if inhaled. It is a highly corrosive chemical and direct contact can severely irritate and burn the skin and eyes, perhaps causing eye damage. It may irritate the nose, throat, and lungs, resulting in coughing, wheezing, and/or shortness of breath. Aluminum bromide is a reactive chemical that might cause an explosion.

Question 4: How can one check if he/she is exposed to aluminium bromide?

The exposure of hazardous materials such as aluminium bromide should be assessed on a regular basis. This might entail taking personal and regional air samples. A worker’s employer can provide him with copies of the sample findings.

Question 5: Explain some methods of reducing exposure to aluminium bromide.

Methods of Reducing Exposure to Aluminium Bromide are: