The main objective of the evolution process is to produce new species. Evolution is a non-ending process of nature. It helps to create modernized species around the globe. From the ancestor, a new species is developed with the help of evolution. Natural Selection, Genetic changes help to create new species. The creation of new species can’t take place within a week or two. It is a very large process that takes several years to complete. After creating a new species evolution still works on the species. It helps to further develop. Evolution is a large process that is completed by small processes like Speciation.

Speciation mainly works on a single species. The main driving force behind Speciation is isolation. A group of creatures of the same species gets isolated. They start developing themselves as per the rule of their habitat. In this way, they produced a new trait in them. This new trait will make a difference from the ancestor species. Hence, the Speciation process is being developed. 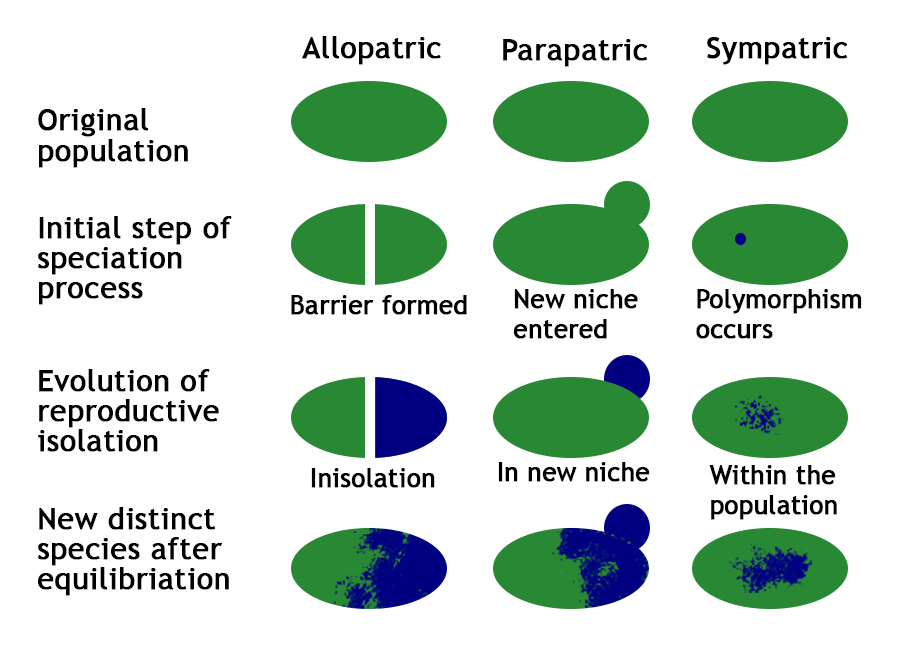 Allopatric Speciation is an important Speciation process. In this case, a barrier forms in nature. A certain barrier divides the species into two or more groups. These groups will create new species in the far future. In a certain area, a species was developing. But due to physical barriers in nature, the groups of species are divided into subgroups. So, they are forced to live in separation. In this form, they have to stay for a long time.

Spending a long time of separation, the genetic structure of the subgroups of the species developed differently. They occur different abilities into them as per the environment of the habitat. In this way, they will be completely in the reproductive isolated stage. This means that between these two subgroups there can’t be any reproduction process will happen.

These traits will be transferred to the next generation of subgroups. Years by year, the two different subgroups are going from two different species. Hence the Speciation process happened there. This particular process of forming species is known as Allopatric Speciation. In this Speciation process, a species doesn’t want to separate & create new species. But nature forces them to create new species in this case.

This is the first step of Allopatric Speciation. Here, first, a physical barrier is created. Physical barrier means those types of things that act as a hazard in between two spaces. Like an earthquake, the soil can be divided into two parts. That can act as a barrier. Sometimes any mountain can be created. That can act as a barrier. This will start the process of Allopatric Speciation.

Due to the creation of the barrier, any species divides into two or more subspecies. These subspecies can able again meet together. This is a long process. In this long process, the subspecies will meet huge changes in them. These changes will not occur overnight. This is the process of genetic change. In one generation, some new traits occur due to physical barriers. This change will be inherited by the next generation. This will influence the genetic change process. In this way, two or more new species developed.

After reproductive isolation is completed successfully, it is a matter of time to make a new species. The barrier is the main driven force here. It is the natural selection process. Here, the species which can able to incur new traits among them will survive in nature. Other subspecies will get disappeared.

In this type of Allopatric Speciation, the physical barrier is completely unstable. This means the presence of the physical barrier is not last long. In such cases, due to the creation of the barrier, one species is divided into two or more subgroups. But after some time, when the barrier gets disappeared, they are free to mate again. But due to long separation, they can’t come close to each other for the reproductive isolation process.

Like in the case of a flood, the water may act as a barrier. But after a long time, the flood can get disappeared from that area. This might act as an unstable barrier. So, the groups are now free to again mate. In these cases, it is completely the choice of the groups whether they will again meet or not. But in the evolution process, their habitat will again overlap with this theory.

Like in the case of mountain creation. In such cases, a mountain will act as a stable barrier to nature. It is hard to disappear from a mountain from nature like a flood. So, it will be a barrier until the new species is created. This is the most seen Allopatric Speciation type in nature.

Can Allopatric Speciation Occur In Plants?

Wood Warbler is a type of bird that can be found in North America. This is an example of Allopatric Speciation. This species is now divided into four species. As one species resides in the east, they are known as the Eastern Species. The remaining three species reside in the west. That is why they are known as Western Species. Scientists believe that four glaciers are the main reason behind this Speciation. One glacier divided the species into two parts. The Eastern Part & Western Part. The Eastern Part remains the same. But three more glaciers divided the Western Part into three new species. Hence, a total of four species developed there.

Finch is another type of bird. They mainly reside on the mainland. But due to some challenges, a group of finch birds started to stay at Galapagos Island. By the time, when the sea started to expand, the island started divided into some isolated parts. So, the sea becomes the barrier in this case. So, all those finches started evaluating in different ways. And they created 13 distinct finch species. Evolutionist Darwin first discovers that. That is why it is often referred to as Darwin’s Finches.

The Arizona Grand Canyon performs as the barrier in this case. There used to live a squirrel species. But the creation of the Canyon divides the species of the squirrel into two subspecies. Those subspecies developed two distinct species. They are known as the Northern Species & Southern Species. It is also an example of Allopatric Speciation.

Question 1: What is Allopatric Speciation?

Question 2: In any species, due to a conflict two or more groups started living in different habitats. Is it an example of Allopatric Speciation?

Question 3: What does reproductive isolation mean?

Reproductive isolation is a certain step in Allopatric Speciation. It is the process when the intra subspecies reproduction can’t possible. This is the process that prevents regular mating among the species. This is caused by the genetic changes in species.

Question 4: Does Human Evolution fall under the Allopatric Speciation category?

Question 5: Other than Allopatric Speciation, what are the other types of speciation?