In this article, we are going to see how to aggregate daily data over a period of months and year intervals in dataframe in R Programming Language.

Base R contains a large number of methods to perform operations on the dataframe. The seq() method in R is used to generate regular sequences beginning from a pre-defined value.

The dataframe is then formed using a sample from this date sequence generated as column 1. The value is generated using the rnorm() method to produce random floating-point numbers.

The strftime() method is then used to convert a time object to a character string back. The format can be specified to extract different components of the date object.

In order to aggregate the data, the aggregate method is used, which is used to compute summary statistics of each of the groups. 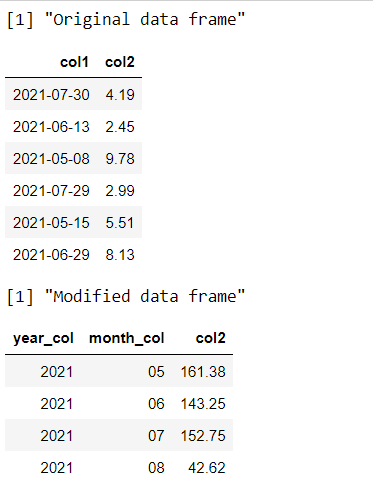 Lubridate package in R is used to provide easier working mechanisms with the date and time objects. It can be loaded and installed in the working space using the following command :

The floor_date() method in R uses a date-time object, may be a single entity or vector of date-time objects, and then further rounds it off to the nearest integer value in the specified unit of time.

The dplyr package is used to perform data manipulations and statistics. It can be loaded and installed in the working space using the following command :

The dataframe is modified by using the piping operator over a sequence of operations and methods. The group_by() method is used to group the data based on the values contained in the specified columns.

Then a summary statistic is performed using the summarize() method which performs a summation over the values contained in the third column. The result is then manipulated into a dataframe using the as.data.frame() method. 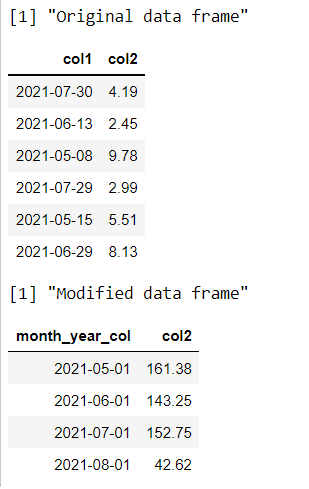 Previous
Visualizing Missing Data with Barplot in R
Next
Use apply Function Only for Specific DataFrame Columns in R
Related Articles
1. Finding Day and Month on a Specific Date in R Language - weekday() and month() function
2. How to Aggregate multiple columns in Data.table in R ?
3. Compute Summary Statistics of Subsets in R Programming - aggregate() function
4. How to Set Column Names within the aggregate Function in R
5. How to Use aggregate Function in R
6. How to Aggregate Multiple Columns in R?
7. Shading confidence intervals manually with ggplot2 in R
8. How to Change Axis Intervals in R Plots?
9. How to Find Confidence Intervals in R?
10. Frequency Table With Intervals in R
Article Contributed By :