Advantages and Disadvantages of ring topology

Ring Topology may be a network configuration where device connections create a circular data path. In this each device is connected to with its exactly two neighboring devices, like points on a circle which forms like a ring structure. A number of repeaters are used for Ring topology with a large number of nodes to send data and to prevent data loss repeaters are used in this network. Together, devices during a ring topology are mentioned as a hoop network. In this packets travels from one device to another until they reach the desired destination. In this data travels in unidirectional forms means in only one direction but it can also do bidirectional by having 2 connections between each Network Node, it is called Dual Ring Topology. It is used in LANs and WANs depending on the card of network in the computer. 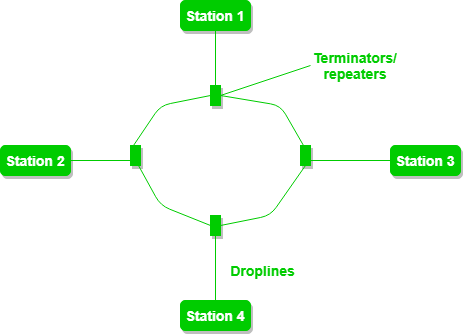