As a Part of Society, communication with people around is very common, and not all communications include facts. Facts are the Universal truth that we all know are true and exist but what if someone says “It may Rain Today” Does this consider to be a fact? No, because neither it is a universal truth nor there is a certainty of that event to occur.

There are some statements given in a list below, let’s take a closer look at them:

Probability is an experimental approach to the game of chances we come across every day in our lives. It is a way to describe these “chances” in a mathematical way and then analyze it. It allows us to measure the chances of something occurring.

The concept of probability was developed by famous philosopher and mathematician Blaise Pascal in the 17th century.

Let’s do an experiment,

Suppose we have a coin, we toss it a number of times and then collect the data about heads and tails. We will perform this experiment multiple times and record the data in a table.

Let’s calculate the values of two fractions given below,

Now if we keep on calculating these values, we will notice that the values start converging towards 0.5 as the number of experiments trials increases.

In the given experiment, tossing a coin is a trial.

An event is an outcome of the trial

Getting a head or a tail after tossing the coin can be considered an event in our experiment. Now let’s define probability.

It is the set of all the possible outcomes

Since sample space, consists of all the possible outcomes. In our case, the number of heads can vary from 0 to the number of times the coin is tossed.

It is a value that denotes the chances of occurrence of some event.

Let “n” be the total number of trials, and E be an event. The probability of occurrence of that event is,

Notice that by its definition, the numerator will always be less than or equal to the denominator. So,

Question: Based on the experiment above, let us say a coin was tossed 20 times, and we obtained 15 heads and 5 tails. Find the probability of getting a head and a tail when this coin is tossed again.

We know that the coin was tossed 20 times, suppose we want to calculate the probability for heads first.

So the event that we will look for is getting head, this happened 15 times when the coin was tossed 20 times.

So the event that we will look for is getting a head, this happened 5 times when the coin was tossed 20 times.

Before introducing Venn diagrams, we need to take a look at the term “Mutually Exclusive”.

Mutually Exclusive: Let’s say there are two events A and B in a trial. If both of them cannot occur simultaneously, then both events are mutually exclusive.

For example: In the coin-tossing experiment, both heads and tails together are not possible. So they are mutually exclusive events in nature.

Let’s say a die was rolled, event A is rolling of an odd number and event B is rolling of the number 3. Now, when 3 comes out of dice, both events A and B happen simultaneously. Thus, they are not mutually exclusive.

The diagrams below represent the Venn Diagram for the coin toss experiment we did above. Since both events are mutually exclusive, these circles do not intersect.

For the example of a die roll, let’s make a Venn diagram for event A and event B. Notice that the outcomes 1, 5, and 3 are in one circle which denotes event A. 3 is common to both the events, and thus it lies in the intersection. 4 and 6 do not come in any event, and thus they lie outside into the sample space. 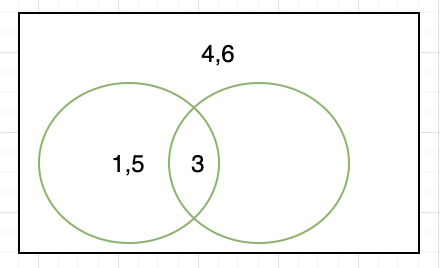 These events are not mutually exclusive, thus the diagrams intersect.

For mutually exclusive events. The Sum of all the probabilities of all the events in an experiment is always 1. For example:

If a trial has three possible outcomes, A, B and C.

Such events are called elementary events.

Suppose there are two events A and B, based on the fact whether both the events are Mutually Exclusive or not, Two different Rules are described,

Rule 1: When the events are Mutually Exclusive

When the events are mutually exclusive, the probability of the events occurring is the sum of both events.

Rule 2: When the events are not mutually exclusive

There is always some overlapping between two events which are non-mutually exclusive, Therefore, the Probability of the events will become,

Let’s see some problems with these concepts.

When a die is rolled, there are six possible outcomes.

Probability of getting a number greater than 4:

Probability of getting an even number:

Question 2: Let’s say a card was drawn from a well-shuffled deck of cards. Find the probability of getting a Queen on one draw.

We know that a deck has 52 cards. So there are total 52 outcomes that are possible if a card is drawn. We also know that there are four queens in the deck. These are our favorable outcomes.

Question 3: A bag contains 3 white balls, 4 black balls, and 2 green balls. A ball is drawn with replacement. Find the probability of getting:

1. Probability of getting a white ball

2. Probability of getting a Black ball

3. Probability of getting a Black ball

Question 4: A satellite from space came crashing down on earth. The figure below denotes the area in which ISRO suspects the satellite crashed. Find the probability that it crashed in the lake. 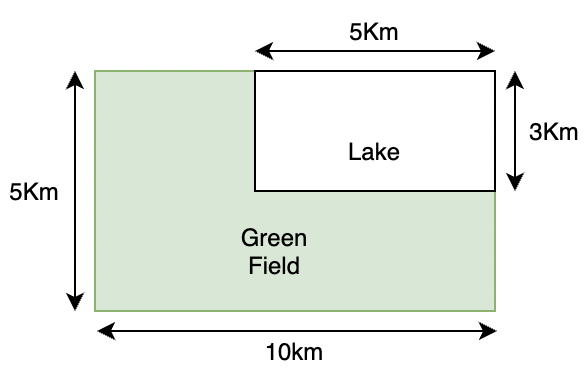 In this we don’t know the number of outcomes. This is a continuous case, that is plane can crash anywhere in the area.

Now we can use these areas to calculate the probability.

Total Number of possible outcomes(area in this case) = 50 Km2

Thus, the probability of satellite crashing in the lake is 0.3.

Question 5: Let’s say we have a well-shuffled deck. We draw two cards, find the probability of getting either King or a Queen.

We know that there are 4 Kings and 4 Queens in the deck.

Question 6: We have an urn that contains three black balls, two blue balls, and three white balls. Find the probability of getting one black, one blue, and one white ball if we draw three times with replacement.

We have a total of eight balls.

We will find out this probability with law of addition.

Notice that the probability sums up to one. This is in accordance with laws of probability.

Question 7: Union Budget is going to be announced by the government this week. The probability that it will be announced on a day is given,

Find the probability of the budget getting announced between Monday to Wednesday.

We need to use the probability addition law,

Question 8: In a class of 90 students, 50 took Math, 25 took Physics, 30 took both Math and Physics. Find the number of students who have taken either math or Physics.

Next
Convert the number from International system to Indian system
Related Articles
1. Difference between Simpson 's 1/3 rule and 3/8 rule
2. Conditional Probability and Independence - Probability | Class 12 Maths
3. Proof: Why Probability of complement of A equals to one minus Probability of A [ P(A') = 1-P(A) ]
4. Check perfect square using addition/subtraction
5. Addition and Subtraction of Matrix using pthreads
6. Modify array by merging elements with addition such that it consists of only Primes.
7. BCD addition of given Decimal numbers
8. Check if N can be obtained by repetitive addition or subtraction of two given numbers
9. Split N into two integers whose addition to A and B makes them equal
10. Minimum repeated addition of even divisors of N required to convert N to M
Article Contributed By :