In this article, we are going to explain Access Links and Control Links. Well, both are in the field of Activation Records. 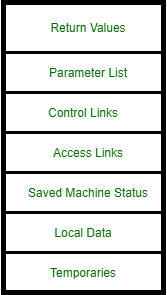 The temporary values, such as those arising in the evaluation of expressions, are stored in the field for temporaries.

The field for local data holds data that is local to an execution of a procedure.

The field for Saved Machine Status holds information about the state of the machine just before the procedure is called. This information includes the value of the program counter and machine registers that have to be restored when control returns from the procedure.


Now, In this example, when Geeks() is called in a main(), the task of Geeks() in main() is to print(g), but g is not defined within its scope(local scope of Geeks()); in this case, Geeks() would use the access link to access ‘g’ from Global Scope and then print its value (g=12).

As a chain of access links (think of scopes), the program traces its static structure.
Now, let’s take another example to understand the concept of access link in detail –


There are no errors detected while compiling the program, and the correct answer is displayed, which is 300. Now, let’s discuss the nesting paths. Nested procedures include an AR(Activation Record) access link that enables users to access the AR of the most recent action taken by their immediately outer procedure.  So, in this example, the access link for geeks and access link for geeks1 would each point to the AR of the activation of the main.
Each activation record gets a pointer called the access link that facilitates the direct implementation of the normal static scope rule.

Control Links :
In this case, it refers to an activation record of the caller. They are generally used for links and saved status. It is a dynamic link in nature. When a function calls another function, then the control link points to the activation record of the caller.
Record A contains a control link pointing to the previous record on the stack. Dynamically executed programs are traced by the chain of control links.
Example – 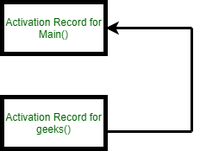 
When the function geeks() is called, it uses the access link method to access x and y (statically scoped) in its calling function main().

The field for parameters list is used by the calling procedure to supply parameters to the called procedure. We show space for parameters in the activation record, but in practice, parameters are often passed in machine registers for greater efficiency.

The field for the return value is used by the called procedure to return a value to the calling procedure. Again in practice, this value is often returned in a register for greater efficiency.