Flutter is an app SDK for building high-performance, high-fidelity apps for iOS, Android, Web(beta), and desktop(technical preview) from a single codebase written in Dart Language. In this article, I will provide line by line explanation of how to build a simple Hello World App using Flutter.

In this article, we will use Stateless Widget, Material App, Center, and Text Widget

MaterialApp: It is also a widget provided by Flutter Team, which follows Google Material Design Scheme, MaterialApp is a class that has various named arguments like home: in which we pass the widget that has to be displayed on Home Screen of an App.  To read more about MaterialApp check out Flutter Documentation.


Here we are importing the package which has a definition for Stateless Widget, Center, Text, Material App, and many more. It is like #include<iostream> in C++ program.

Build: It is a method that is responsible for drawing components on the Screen it takes a BuildContext as an argument that has information about which widget has to be displayed and in which order it has to be painted on the screen. 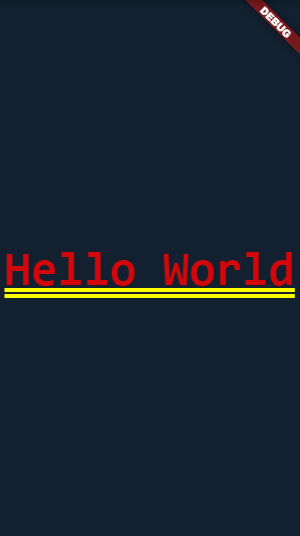 It does not look like a Modern App, Let us add material design! 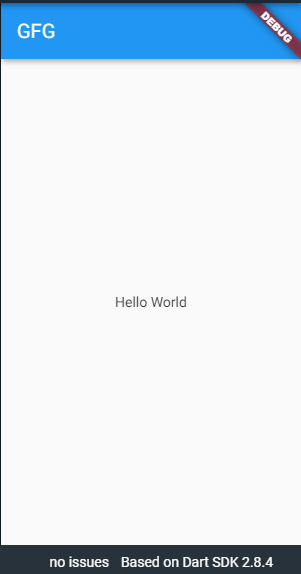 Output explanation: In the first line we have imported the material design library which will be used in this app. Then we have our main function. This is the point where the code execution will start. Then we have the class ‘GeeksForGeeks’  which is extending the StatelessWidget. This is basically the main widget tree of our ‘hello world’ app. All this is followed by the build method, which is returning a MaterialApp widget.  Then we have employed home property of the MaterialApp, which in turn is holding the Scaffold widget. The Scaffold widget is containing the whole screen of the app. We have used the appBar property which is taking the AppBar widget as the object. And in turn, the AppBar widget is holding ‘GFG’ as the title. Then we have the body, which is again the property of the MaterialApp. Center is the object of the body and its child is Text widget which reads ‘Hello World’.