Today, Android continues to dominate on a global scale. Nearly 75% of the world population prefers using Android as against the 15% of iOS. It is an operating system that has a huge market for apps. The Google Play Store is home to a staggering 2.87 million apps with each app unique and intuitive in its way. Hence, it’s not just the idea but an overall skill set of a developer that plays a humongous role in determining whether an app would be a success on the Google Play Store or not. 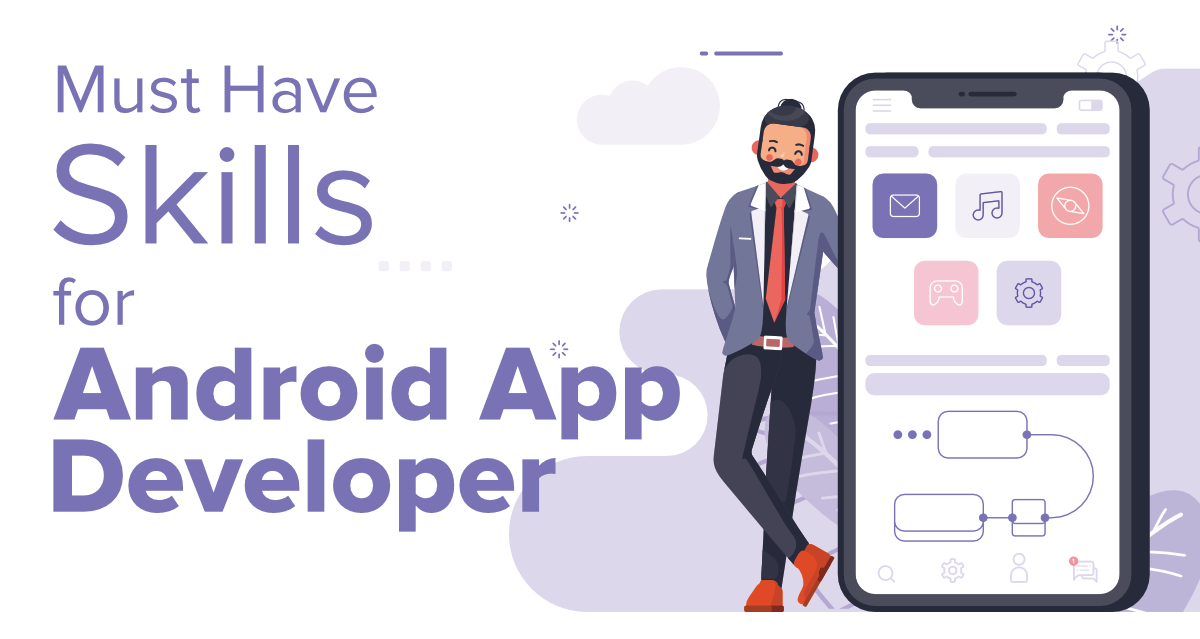 Here’s our take on the top skills required by developers to develop Android apps.

1. An Unprecedented Knowledge of Java and Kotlin

In fact, in the case of Kotlin, Google has announced this statically typed programming language as the first choice for Android development.

As for Java, it is often used in an integrated development environment for Android application development.

The proficiencies that developers need to have of Java include the following.

B) Knowledge of Syntax: Having a sound knowledge of Syntax is as important as the proficiency with the latest version. Syntax refers to the set of rules that define how a Java program is written and interpreted. Hence, developers need to gain a thorough understanding of Syntax.

C) Proficiency With the Latest Programming Structures of Java: Gaining a vital understanding of the program structures can help developers develop Android apps in much less time and with minimal mistakes.

Here, it’s vital to note that the proficiencies discussed above are the same when it comes to Kotlin as well owing to its greater similarities with Java. Hence, for developers to engage in Android development, it is crucial to gain an understanding of both Kotlin and Java at the same time.

2. Need to be Technically Sound

The Android app industry today is rapidly transforming and new trends continue to come up. In this era, it is vital for developers to be technically sound and to be able to create innovative apps for virtually every device.

It is perhaps safe to say that not just a hands-on experience of Android Studio, Android SDK, and APIs, but to stay updated with these latest technologies and things happening around them too is what matters.

3. Vital Sense of the UX/UI

Today, the majority of app users demand a highly engaging and responsive application that is easy to use. Hence, the demand for an intuitive UX and UI rises even more. As per a report, more than half of the world app users judge the app on the very first impression.

While this is a fact, the market too demands designers and developers with a sound understanding of the design of an app today. So to develop an Android app that stands out, one needs to have a good knowledge of the design requirements of Android apps and what type of designs users prefer.

Nowadays, cross-platform solutions are the need of the hour. Various frameworks like React Native and Flutter have come into play to let Android developers build applications that can operate on the iOS platform too. The tech giant Google has introduced Kotlin Multi-Platform, an extension of Kotlin language to enable mobile application development beyond the Android platform.

This is a move that has been welcomed by Android users around the world, and any potential developer certainly needs to be mindful of it.

5. The Significance of Critical Thinking

Critical thinking is a crucial aspect of app development, and Android developers are not away from it. For any developer longing to develop an Android app today, having a critical mindset is the key. It allows developers to maneuver every move and test all possible points with as much clarity. This is always beneficial as it reduces any potential chance of mistakes in coding an app.

Having a good enough knowledge of the business side of app development would determine the visibility of your app on the app store. The majority of developers today focus on making their apps visible to the users. Easier said than done, this requires a sound understanding of the business as developers should be able to optimize their apps accordingly to make it visible on the Google Play Store. Hence, if you’re an app developer wanting to develop an Android app, understanding the business side of things can be the real deal.

7. Need to be an Ardent Researcher

Thorough research about the market trends, what users prefer for apps, the kind of features integrated into the competitive apps, etc., is one of the very first steps of Android app development. For any potential developer longing to develop an Android app, the kind of research he/she conducts would determine the type of features the app would be integrated with ultimately. It would not only affect the features but would also set a course for the kind of experience users would have using the app. Hence, a thorough understanding of how to perform research is needed from the developer’s end.

8. Adaptability is the Key

Last but not the least, being adaptable as a developer is one of the key things in terms of Android application development. Nowadays, the majority of top app developers lay additional emphasis on adapting to new technology and techniques for app development and to come up with apps that are a success in general.

From research and technical knowledge to business and design, developing Android apps today takes a lot into account, and developers need to be right on the mark. As competitiveness grows, so does the overall skills of developers. Moreover, apart from having the skill sets, being aware of the ever-altering guidelines of the Google Play Store is a significant factor and should be kept in mind while developing an Android app.

Previous
Matcher find(int) method in Java with Examples
Next
7 Tips to Improve Your Android Development Skills
Related Articles
1. Want to Become an Android Developer - Learn these 5 Tech Skills!
2. How to Publish Your Android App on Amazon App Store for Free?
3. How to Integrate In-App Review API into Android App?
4. How to Share Text of Your App with Another App and Vice Versa in Android?
5. How to Share Image of Your App with Another App in Android?
6. 7 Tips to Improve Your Android Development Skills
7. 13 Technical Skills You Should Have As A Developer
8. How to Keep Your Skills Updated As a Software Developer?
9. 10 Skills to Become a Backend Developer in 2023
10. Top 10 Front End Developer Skills That You Need in 2022
Article Contributed By :