Did you think that one-day robots could be a reality and not just science fiction films? Or you could be sitting in your living room and get transported to the rainforests of Africa by wearing VR headsets? Or maybe you could control your whole house with just one click on a remote? All these are not only possible but becoming commonplace with the advent of new tech fields like artificial intelligence, virtual reality, the Internet of Things, etc. 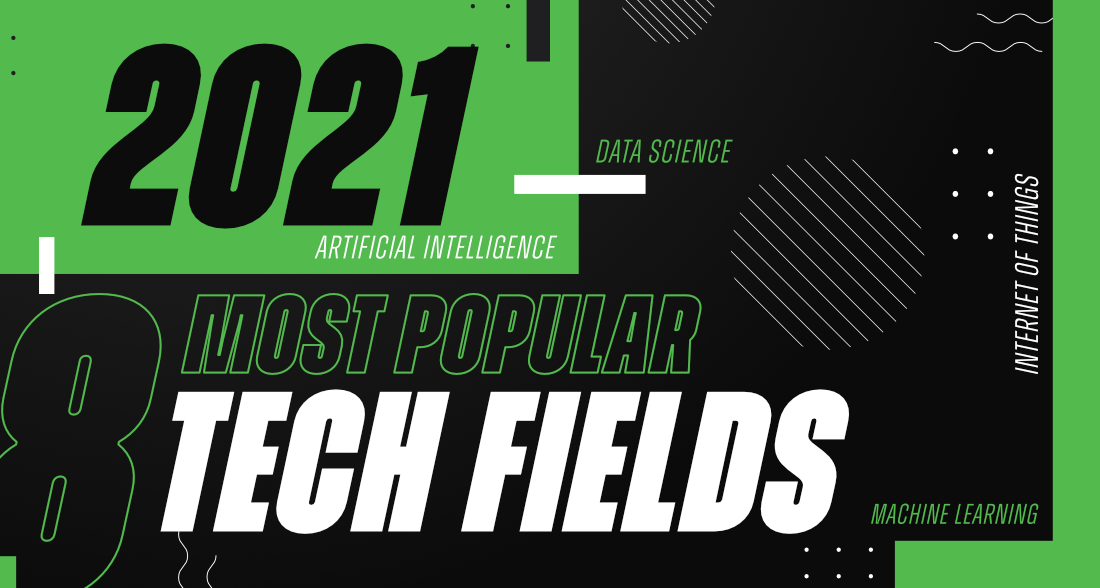 These technologies have spiced up the tech world and changed how things work. Now IT professionals need to continuously learn new things and unlearn their old ideas if they want to remain relevant in this new world. This has become even more important in the aftermath of COVID-19 which has entirely changed the way companies work and demonstrated the need for innovation in technology. In this situation, there is an increasing demand for employees and innovators in new and popular fields with not enough supply. But what fields are these? Well, read on to find out!

Data is useless unless it can be studied and analyzed to extract out the meaning inside it. And that’s precisely what Data Science does! This is an interdisciplinary field related to Computer Science, Maths as well as Business Knowledge and it mainly deals with extracting actionable insights from the data. Data Science is very popular currently and it is even called the “Sexiest Job of the 21st Century” with around 11.5 million new jobs created by 2026. A Data Scientist utilizes this power of Data Science to design new algorithms for data modeling, create data visualizations and predictive models as well as perform custom analysis on the data according to the business needs. For this, the basic skills that a Data Scientist possesses are Data Mining, Python, SQL, Statistical Analysis, Data Visualization, etc. and they are well paid with a salary of $115K per year.

Humans have natural intelligence but what about machines? Artificial intelligence is the field that deals with creating artificial intelligence for machines that mimics the natural intelligence gifted to humans. This is partially achieved by creating artificial neural networks that mimic the neurons in the human brain. Artificial Intelligence has a variety of applications in image recognition, natural language processing, autonomous robotics, etc. That’s the reason this technology is so popular with the AI market projected to grow to a $190 billion industry by 2025. A particular job that deals with Artificial intelligence is the AI Architect. He is responsible for creating AI solutions for the client as well as creating the system architecture based on the AI frameworks. The basic skills required for an AI Architect are languages such as Python, R, etc., and different AI technologies such as Machine Learning, Deep Learning, Artificial Neural Networks, etc. This is a great option for AI with an excellent salary package of $200K per year.

While Artificial Intelligence deals with creating an overarching method for holistic intelligence in machines, Machine Learning deals specifically with machines learning automatically without being explicitly programmed. So, Machine Learning is a subpart of Artificial Intelligence and much more widely used these days! The machine learning process starts with creating a machine learning algorithm and then training it by using training data before using it with actual data. The choice of the ML algorithm depends on the type of data and the kind of task to be automated. In the corporate world, a Machine Learning Engineer manages the machine learning models of the company. They also scale the theoretical ML models in real-life models that can handle terabytes of data. Machine Learning Engineer is one of the most in-demand jobs with a salary of $120K per year. There are many Machine Learning models in this world including Linear Regression, Logistic Regression, Regularization, Support Vector Machines, Decision Trees, Neural Networks, Unsupervised Learning, etc.

Cloud computing is a perfect solution for smaller companies with lesser resources with 94% of companies already using a cloud computing service in one form or another. Companies can access different computing services like specialized software, databases, artificial intelligence, data analytics, servers, etc. over the internet, which is much cheaper than if they had to buy their own resources. These companies can run their applications on the best data centers in the world with minimal costs. And the popularity of cloud computing has given rise to the role of the Cloud Architect with a yearly salary of $150K. He is responsible for managing the cloud computing strategy of the company which includes cloud management, cloud application design, cloud architecture, cloud deployment models, etc. There are many cloud computing vendors that offer these services to companies such as Amazon Web Services, Google Cloud, Microsoft Azure, IBM Cloud, etc.

There is an insane amount of computing devices in the world, and together they make up the Internet of Things. All these devices are connected over the internet and their frequency is only increasing with a prediction of 50 billion IoT devices by 2030.  IoT devices can collect and exchange data with each other which needs to be mined for actionable results and that is where Artificial Intelligence comes into the IoT picture. Internet of Things is a dynamic technology that can result in smart homes, smart cities, etc. So the IoT Solutions Architect is a high-paying job related to this field with a salary of $110K per year. The IoT Solutions Architect creates practical IoT solutions and applications for companies using IoT technology. This means that the IoT Solutions Architect handles the management of the whole IoT ecosystem of a company which includes making abstract IoT ideas more concrete, helping with creating IoT constructs, and so on. For this, knowledge of Artificial Intelligence, hardware architecture, as well as excellent programming skills are a must.

Blockchain is a chain of blocks where these “blocks” constitute digital information that is connected using cryptography. These blocks contain a cryptographic hash function linking to the previous block, a timestamp, and the digital information in the block. Blockchain is the newest method in security because the blocks are created in such a way that it is very difficult to modify the data. This ensures security while also maintaining transparency as the data in the block is not hidden in any way. That is why Blockchain is becoming very popular in fields like banking, finance, etc. where security is a must! The global spending on Blockchain was 1.5 billion in 2018 and is predicted to grow to 15.9 billion by 2023. In fact, a Blockchain Engineer focuses exclusively on security using Blockchain technology and creates the system architecture and decentralized applications for Blockchain with an excellent salary at $100K per year. This technology first got popular because of its implementation in Bitcoin and so a Blockchain Engineer needs to be educated in different Blockchain technologies that are used in Bitcoin, Ripple, Ethereum, etc.

Quantum Computing sounds like science fiction but it is a very real technology! It is based on the laws of Quantum Physics, which specify the behavior of energy and matter on the quantum level which is the atomic level! Quantum Computing is also a factor in creating a quantum computer that will have the capability to perform multiple calculations simultaneously. This would be revolutionary as this would make a quantum computer a million times faster than even the most powerful supercomputers today! This facet of Quantum Computing could change entire industries in the future like Telecommunications, Healthcare, Finance,  Cybersecurity, etc. That’s why the global revenues from this market is expected to increase by $2.5 billion in 2029. Currently, a Quantum Engineer uses some measure of Quantum Computing in tech. The role of a Quantum Engineer includes developing solutions for quantum technologies, contributing to the creation of a quantum computer, etc. Since this is a new technology, a Quantum Engineer is paid around $75K per year but this will only increase in the future.

Both Virtual Reality and Augmented Reality can be used to enhance the day-to-day reality of life into something different! Virtual Reality can create a simulated environment that is totally different from the reality of this world! This is a sort of alternate reality that you can experience as if you were really there. But this is only possible using a Virtual Reality headset. On the other hand, Augmented Reality creates an “Augmented” version of reality by adding different layers of digital information over the real world. This can be done using AR apps in smartphones that use the camera to display the real world and superimpose extra information like text and images onto that world. To become a Virtual Reality or Augmented Reality developer, it is very important to have some technical and programming expertise along with hardware engineering knowledge. Many Virtual Reality developers are also involved in gaming so having knowledge of game design and development is a bonus. And this results in a handsome salary of $90K per year!